We’re out! Well, at least in the sense of walking on Saturday morning. In other senses we were very much ‘In’ but that decision is made and it’s time to move on.

We’re back near Marlow, this time a few miles further down the road from Medmenham, starting our walk near Hambleden Lock (map). It’s the week before the Henley Regatta and the Thames towpath is crowded with coaches cycling up and down shouting animatedly into radios. The River itself is full of 8s and 4s out practising. We think we spot the GB coxless 4 (judging by their vests) but really we have no idea!

Arriving at Henley we walk north whilst the skies become increasingly leaden and eventually we get caught in a couple of showers. There is something quintessentially English about quiet country lanes, undisturbed villages and this weather. We arrive back at the car, 10 miles and 3hrs 40mins after starting. An enjoyable walk and we’ll probably return later in the year to walk it in the reverse direction. 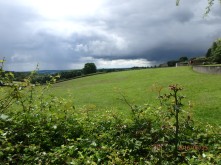 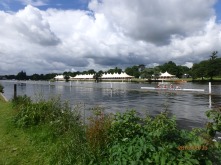