According to Lemony Snicket “Morning is an important time of day, because how you spend your morning can often tell you what kind of day you are going to have.” Whether you believe such tosh or not, we’re in Great Offley by 7-15am, mostly because we have a busy weekend and this is the only time for a walk. This will be the last of our walks in this part of Hertfordshire for the moment.

The skies are clear and the sun’s out, the numerous vapour trails above us are the only reminder that others have been up for a while. We have the paths to ourselves. By the time we reach King’s Walden it’s still early and there’s no one to witness us getting lost in the village…hard to believe when it’s so small but we’re trying to find the path on towards Frogmore Bottom and the planned route thorough the church yard is certainly not allowed! Eventually we’re back on track, across Kings Walden Deer Park and passed its Doomsday Oak. The sun’s out and we’re busy talking. So much so that the mountain biker takes us by surprise as we enter Hitch Wood…I think he’s the first human we’ve seen so far this morning. There are some great skies and wide views as we approach Great Offley by way of Offley Ho but the remainder of the route is both unremarkable and not unpleasant…is that damning with faint praise…? It’s not meant to be but it can be said of a lot of the northern end of the Chilterns. Please correct me if you think I’m wrong.

Nevertheless an enjoyable early morning 10 mile walk and the rest of the day was actually quiet good…does that mean Lemony Snicket is also right? 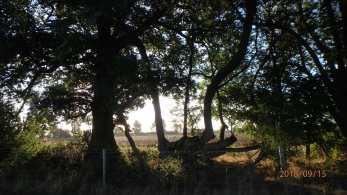 A taste of England, Kings Walden 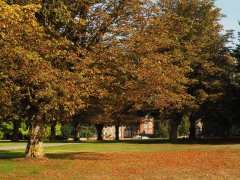